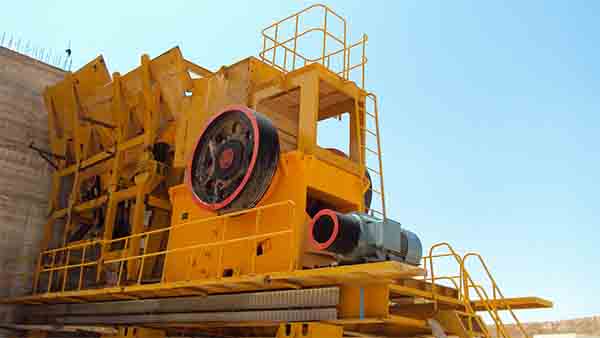 High manganese steel is the traditional material of the jaw plate of the jaw crusher, which has good impact load resistance. However, due to the structure of the crusher, the opening angle between the movable and fixed jaws is too large, which easily causes the abrasive to slide. Due to insufficient deformation and hardening, the surface hardness of the jaw plate is low, and the abrasive material is cut in a short distance, and the jaw plate wears faster.

Although high chromium cast iron has high wear resistance. However, due to its poor toughness, the use of high-chromium cast iron as the jaw plate may not necessarily achieve good results. In recent years, high-chromium cast iron has been used for inlay casting or bonding on the high-manganese steel jaw plate to form a composite jaw plate, which has a relative wear resistance of more than 3 times, which significantly increases the service life of the jaw plate. This is also an effective way to increase the service life of the jaw, but its manufacturing process is more complicated.

Medium-carbon low-alloy cast steel is also a widely used wear-resistant material. Due to the combination of high hardness and appropriate toughness, it can resist the fatigue peeling caused by the cutting and repeated extrusion of materials, and thus exhibits good wear resistance. Production operation tests show that the service life of general medium-carbon and low-alloy steel jaws can be increased by more than 3 times that of high-manganese steel.