The commonly used beneficiation and purification processes of silica sand mainly include the ore washing and desliming method, magnetic separation method, flotation method, and pickling method, which are designed to remove impurity minerals contained in the original ore. The main component of quartz sand is silica, accompanied by small or trace impurities. Silica sand has a wide range of applications and a large demand, so it is necessary to purify the ore to obtain high-purity quartz sand. 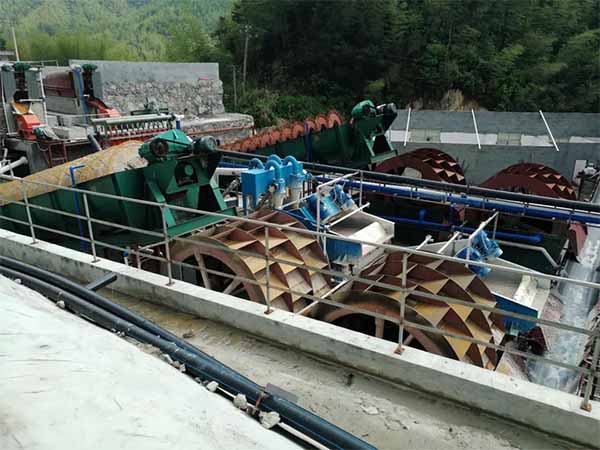 The commonly used silica sand washing and desliming method is mainly the scrubbing method, which is usually completed by the high-efficiency scrubbing machine. In the production process, a rubbing aid can be added to change the particle size composition of minerals, enhance the fragmentation of mineral particles by the scrubbing machine, and improve the impurity removal efficiency of quartz sand. Keep the scrub concentration between 50% and 60%. The scrubbing time is determined according to the nature of the ore, based on the initial product quality requirements.

The scrubbing method is suitable for quartz sand containing a large amount of clay and sludge, or for removing thin-film iron and adhesion impurities on the surface of quartz sand.

The flotation method can be used for purification, such as removing mica and feldspar from quartz ore, when scrubbing, ore washing, desliming, and magnetic separation cannot achieve the purification effect.

Silica sand is insoluble in acid (except HF), and acid solution can dissolve other impurity minerals. The pickling method uses this feature to realize the beneficiation and purification of quartz. Acids commonly used in the quartz sand pickling method include sulfuric acid, hydrochloric acid, nitric acid, and hydrofluoric acid. According to production practice, the mixed-use of acid has a better effect on the beneficiation and purification of quartz sand.

Quartz sand contains iron, aluminum, magnesium, titanium, chromium, and other impurities, and the purity of quartz sand is relatively high.